Last week was a historic one as my first proper SLR camera arrived, a rather sexy Canon EOS 550D. As I haven’t got the kind of large lenses I require for proper wildlife photography yet (but not for long!), my first outing with it was more of a test drive to get my head around the settings of the new camera, similar in some ways but with obvious differences to my trusty ‘bridge’ camera I’ve been using previously, the Panasonic DMC-FZ38.

As you can guess by this post’s title, the outing was my regular half-term excursion to stay with my brother in London. It was the third time I’d been to the city in four weeks (first to see Dr Faustus at the Globe, second to go to the inspirational new WildlifeXpo), so I’m already quite accustomed to the atmosphere. Whilst I’m obviously far happier in a rural environment where wildlife is more obvious, London is surprisingly rich in interest for wildlife geeks like me (just read Mike McCarthy’s excellent ‘Nature Studies: City of Falcons’ for a taste of why this is the case), and my test drive with the canon was at two of my favourite nature spots in the city: The Zoo at Regent’s Park and Richmond Park, which of course was in full swing with the deer’s annual rut.

Probably my favourite shot from the zoo shoot was this profile of a Macaroni Penguin, though it shares it’s brilliant enclosure with representatives of the Humboldt and Macaroni species’ too. With the limited zoom of the 18-55mm IS lens that came with the camera the penguins were among the easiest to shoot due to their close proximity to the public, and they’re undoubtedly photogenic because of the character these birds create that appeals to us anthropomorphically: They’re certainly one of the superstars of the zoo.

The handsome beast in the above photo is of course an Aardvark, it’s name translating to ‘Earth Pig’ in Swahili. They’re a remarkable mishmash of features that make it seem like nature went AWOL on the size enhancing feature of photoshop, but in reality they’re huge ears, snouts and claws are perfect adaptations for it’s niche of extracting termites from their monstrous mounds. When I visited Kenya this summer their enormous burrow entrances could sometimes be seen from the side of the road, and can even be a bit of hazard if your driving too fast! This pampered aardvark at the zoo was in the process of receiving it’s lunch, a porridgey mixture to make up for the vast number of termites that can’t be supplied in captivity. 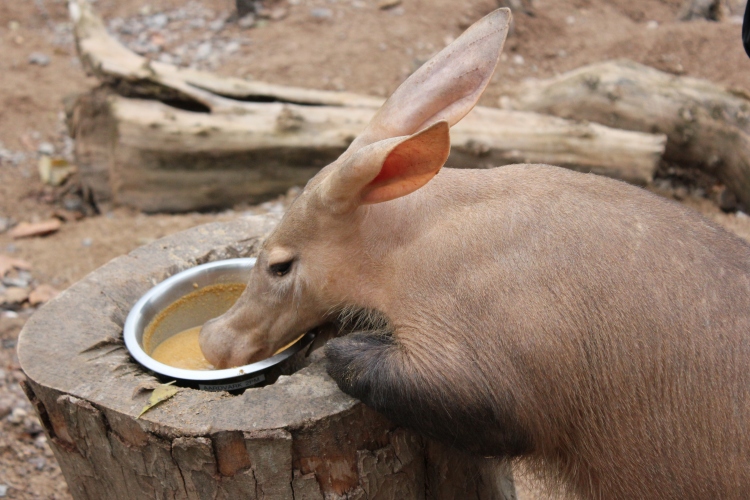 The two photos below, of a woolly-necked stork and sumatran tiger, were both taken at fairly low ISOs: both around about 400. Basically that’s the camera’s sensitivity, and in my eagerness to get snapping one thing I managed to miss in the manual. Not necessarily bad photos, but in a much poorer quality than what they could be due to the lack of light. Ah well, that’ll teach me.

And for those like me who can’t stand the awful environmental policies outlined so far by the coalition, feast your eyes on his mural painted only three days before I visited in the BUGS exhibit in the zoo. 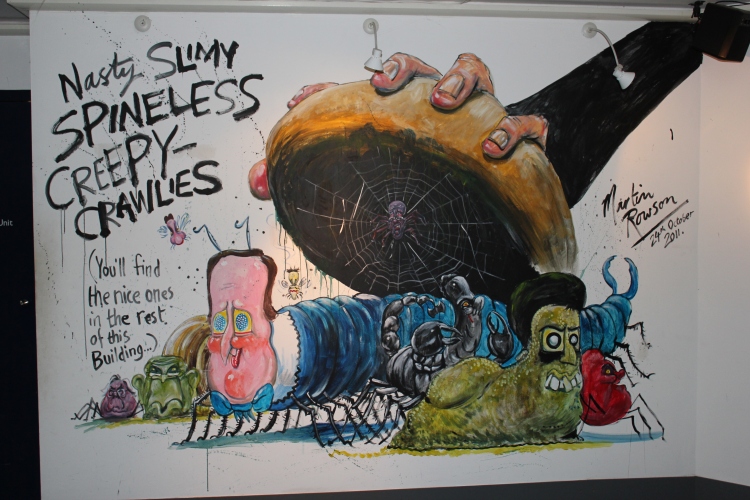 Fast forward a day, and it’s time for the the testosterone charged stags and bucks bellowing at their best in Richmond Park. The trip to see the deer rut here has been an annual fixture for nearly five years in our family now, and this years was certainly one of the best. A beautifully clear and crisp Autumnal day was spent walking to the sound of parakeets screeching overhead, and we managed to find harems of both fallow and red deer, patrolled by the boys in charge with a proud strut and of course that brilliant roar charismatic to this time of year, proving to his girls that he’s worth it!

Due to the short range of my current lens’ zoom and the distance I had to keep to ensure I wasn’t beaten to the ground by an angsty stag (which would’ve been a bit of a downer on the day, frankly), the photos don’t show as much deer as I would like to, but there you go, another reason to order the expensive yet reliable bigger lenses as soon as I can. We didn’t see any antler clashes, which perhaps isn’t surprising given the rut had been going on for quite a length of time already, but there were plenty of immature males getting too close to the hinds for the stag’s comfort for him to see him. Keeping my distance for a good reason then!