Last week, completely out of the blue, DEFRA decided to announce their plans for buzzards, our most common, and certainly well loved, raptor. For some reason, they thought that just because they didn’t want to kill them meant it would go down OK. But in a government that consistently wants to brush aside that pesky, growth-intrusive thing called wildlife (Forest sell-off, Planning law changes, Badger cull, et al), suddenly going “hey, instead of preserving nature why don’t we go about trapping and destroying the nests of buzzards just so Lords & Toffs get a few more pheasants to blast out of the sky” was never going to be a popular move.

Starting with basics, is it that big a problem? Sure, if there’s hundreds of sitting, um, pheasant chicks sitting plump in a rearing pen the buzzard will have a go, and there’ll be losses. I live nextdoor to a fantastic piece of woodland that unfortunately is also used for pheasant rearing and shooting. But it also has a stable buzzard population with up to 5 individuals sometimes being present in the same area. And while you can sometimes see the remains of an unlucky pheasant that ended up as buzzard soufflé, there are still hundreds of the bloody things around by February, doomed to be blasted out mid-flight by wealthy hoo-rahs or wrung in the neck if the shot didn’t do the job.

The worst bit however is the dozens that survive the season. Reared by gamekeepers who plonk out seed for them as if they were farmyard hens, when they are released into the woods the struggle to adapt to a wild life takes out many. The more savvy ones however rip apart the woodland floor in numbers far beyond what nature would usually allow. The impact of so many of this non-native species on our woodlands would be a far more resourceful use of DEFRA’s time (but they’d be undoubtedly too scared to do it for fear of upsetting Dave, Ozzy and the rest of their gun-ho chums).

So why did DEFRA even consider this plan? If anything buzzards are absolutely beneficial to pheasant shooting, keeping their numbers down so there aren’t so many ‘surplus’ after the shooting toffs have put a mark on the amount they can either eat or stuff in a pit. And anyway, buzzards are more inclined to go scouting for carrion, swoop down on rabbits or pluck earthworms than bother pheasants most of the time. The buzzard in this picture (taken from my bedroom window) was far more interested in the former than eating the bystanders. 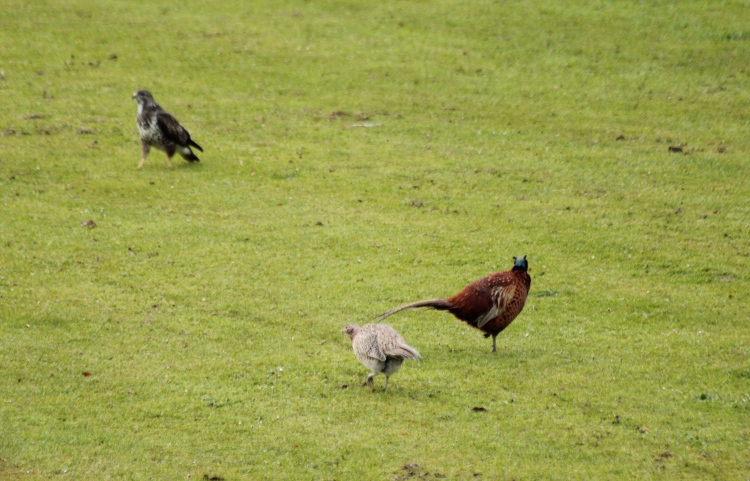 Once again, it is a sign of a government that doesn’t understand or care about nature at its core. Rather than spend money on making Marine Nature Reserves, increasing our wildflowers and pollinating insects, developing outdoor learning for schools or any number of beneficial ways of preserving our wildlife for both its own value and future generation’s, they try a stupid plan especially for the ‘elite’ of people who run our country. And as they’re not even considering netting over rearing pens, which would cost just as much or even less than the current plans, it shows predator-prejudice is once again the subconscious feelings at the heart of this. Buzzards join a long list that includes foxes, corvids and sparrowhawks, all species’ scapegoated to take the blame for many of the problems we’ve made.

But just as we stopped the forestry reforms, the public voice is the best way to stop these ridiculous ideas. Start by signing the petition, or even better contact DEFRA directly. We can’t let our supposed guardians of rural Britain prioritise some rich fat cat’s game over the far more valuable buzzards and the rest of our country’s wildlife.