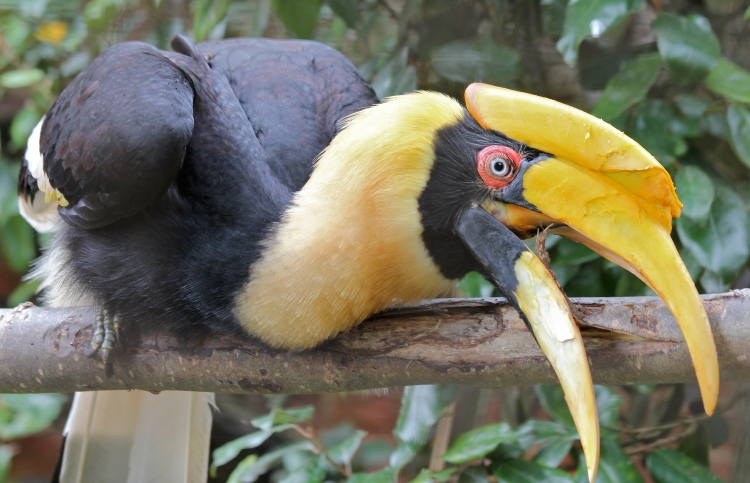 ‘Great’ in both senses of the word, the Great Hornbill Buceros bicornis is the largest and arguably most dazzling of the hornbill family. With Great Hornbills, they’re physiology is as much about spectacle as practicality, with it’s dazzling yellow neck and beak and hollow casque largely the result of sexual selection. These come to the fore in the bird’s breeding season, when the booming and repetitive roars and barks of promiscuous hornbills resound through the tropical forests of South-east Asia and Western India.

Perhaps the most fascinating part of these animal’s breeding ecology however is their nesting behaviour. As the female begins to incubate eggs, she imprisons herself within a nest cavity in a hollow tree by sealing up the entrance with mud, till only a teeny gap remains for her mate to feed her and for her to deposit her faeces. In many ways, a sound strategy; practically a zero risk of predators taking the eggs, and the maximum amount of energy that can be put into incubating eggs is utilised. It’s just ensuring nothing happens to Daddy, who becomes her and their chicks literal lifeline for over 50 days!

The individual in this photo (a female, as indicated by the pale-coloured iris) is a captive bird at the Cotswold Wildlife Park in Oxfordshire. The Great Hornbill’s complicated nesting behaviour makes them difficult to breed in captivity, yet the Park was among the first to succeed in doing so, and continues to be part of the bird’s International Captive Breeding Programme.