It’s only a theory; but when it comes down to the basics of why people often fall in love with the wildlife around them, I feel there’s two basic attributes of the natural world that hold the appeal in different ways. Its familiarity and simultaneously, its mystery.

The familiarity includes the aspects that we all know and love about nature. The things we can observe simply by stepping into the garden, walking down the street or strolling through the woods. These are the Winter garden birds around the feeders and the robin singing in the frost; the swathes of bluebells and croaking of frogs in Spring; the aerial dances of swallows and the harvesting of blackberries in Summer; followed by the spectacular scarlet shades of leaves in our Autumnal woods, sheltering the explosion of fungi below. They’re constant presence in our lives enriches our own lifestyle, creating strong personal attachments that leave us with a warm feeling of privilege to have such beauty as an everyday feature. It’s why the tragic stories of fewer cuckoos, declines in hedgehog numbers and ash die-back receive such prominence in the press compared to the plights of sand lizards, freshwater pearl mussels and the like. It’s as if our lives, not just their’s, are falling apart.

And then there is the mystery. If anything this is the larger driving force behind people’s interest in nature: The familiarity aspect is rooted in the privilege of being able to the know the mystery just a bit better. We are a part of nature, and yet we are so distant from it since we abandoned hunter-gatherer lifestyles. It’s ‘laws’ if you can call them that contradict anything human society has come up with, to the point where words like ‘wild’ and ‘animalistic’ describe anarchistic behaviours within our culture. Like a herd of elephants within an ecosystem of a room, it sits behind our ‘civilised’ lives acting out the same basic life processes it has done for 2 billion years since the first bacteria and algae started kicking about the primordial soup, through the dominions of fish, reptiles, dinosaurs and mammals. Only one species Homo sapiens has been selfish enough to distance itself from all this in the last few millennia, and in doing so have turned our birthplace into an alien world.

So within this mysterious natural world, we have the secretive denizens that don’t appear in our lives as frequently as the grey squirrel, the blackbird or the cranefly. The fact that we know they’re out there, living their lives in parallel to ours yet completely outside our perception, drives an excited curiosity in us.

When I was very young, probably out about 4 or 5, I was shown an old pocket-bird book by my Mother, who had been given it to her by her school back in the early 60s. Spotting Birds, by Jaroslav Spirhanzl Duris and Edmund Burke, was a treasure trove of discovery and my first bird book. As it was designed for children, the information was easy to read and there were some beautiful coloured illustrations, topped off with that wonderful second-hand scent such aged books attain.

I was enthralled by the variety of birds the book presented, many of which I had no idea  were out there in the countryside. And these two pages in particular really grabbed my attention: 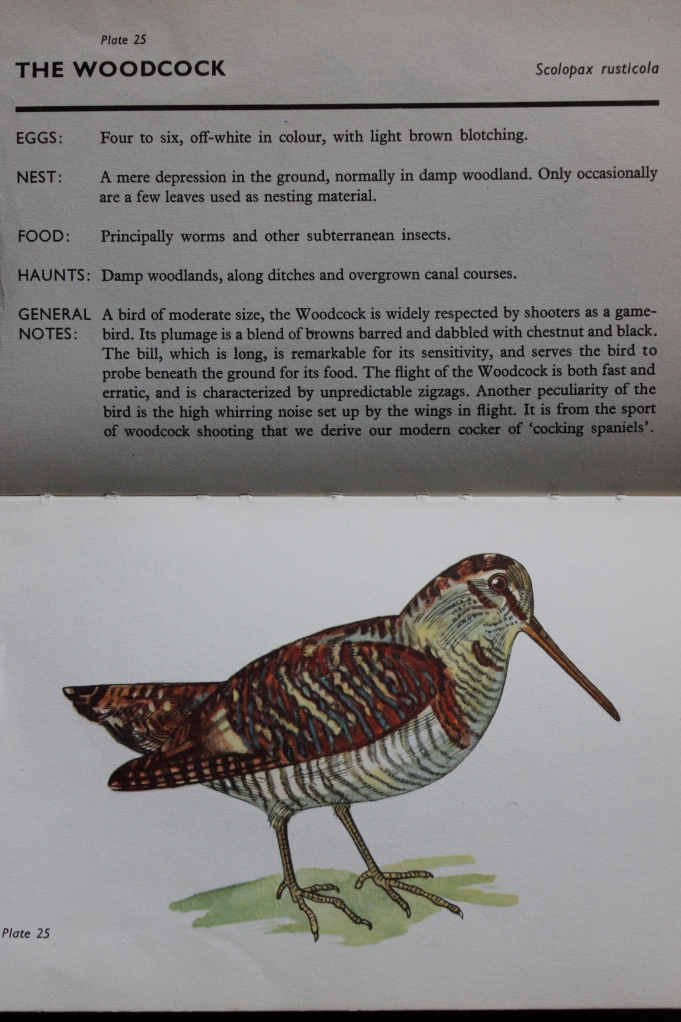 Everything about this bird had me drawn in. The sketch of it, though crudely drawn looking back on it, created a bizarre yet beautiful animal that to me seemed like something from a fairy story. But it was real, and out there; it could even be living in the woods behind the garden, lying perfectly camouflaged within it’s ‘mere depression in the ground’. The juxtaposition of the familiar and the mysterious made this one of the earliest birds to ‘fly away’ with my imagination.

But the bird’s secretive reputation held true, and I didn’t see my first woodcock till this Summer, with a brief but memorable sighting of a roding male in New Forest heathland (incidentally seen on the same night as my first nightjars). But I feel that my first sighting was a couple of weeks ago.

It was while walking the dog in the woods behind the garden at midday, covering the usual route. As I moved into the older part of the wood from a long stretch of clearing, a pigeon-sized brown bird flapped frantically out of the bracken at my presence, it’s wings ‘whirring’ as it flew. I often flush out pheasants accidentally this way, but this was obviously very different. It seemed more like a… Seconds later, my suspicions that this was a woodcock were confirmed when a second individual was flushed out much closer to me this time. I could see the beautifully speckled, earth-coloured markings, uncannily similar to the leaf litter it nests within. The beady eyes unusually high upon the head and the long, straight beak for probing damp woodland floors for grubs.

I was literally dancing on the spot following this sighting. Not only was it a fabulously close encounter with such a rarely seen bird, it also gave closure to the dreams of seeing that wonderful creature peering back at me from Spotting Birds in my local woods after 13 years of waiting and wondering.

The enigma had become part of the familiarity. The constant surprises nature throws us – and how we can never predict them – is why I feel it is the most exciting interest to have.

One thought on “The Wild Enigmas”