The end of another year; the last of the turkey leftovers are being digested, the last-minute panics of where to go for new years grabs everyone’s attention, and the papers are full of review-of-the-years and look-aheads to the next. These have certainly been true in my case (though I think the second one is just about sorted now), and so it is that I embrace the latter and look back fondly on what has been one of the best years of my life so far. A really wild year it has indeed been, with the wildlife experiences I have had being among my most spectacular.

So without further ado, a quick rundown of some of 2012’s natural highlights.

‘Lifers’ Galore – Particularly with birds, since this was the year where I gave them a bit more ‘attention’ (always been more of a mammal & herptile guy). Water Rail at Winnall Moors in February, and Nightjar and Woodcock were both ticked off on the night of June 12th. A plethora of firsts from Fishlake Meadows, my local wetland site which is now much easier to access after passing my driving test this year: the 12th May alone had my first visual sighting of a Cuckoo with four Hobby then catching dragonflies above my head. The cream of the crop there came in September, when I saw my first Osprey and Bittern within a week of each other at the site. Wetland birds just kept on coming during my visits to Cley Marshes and Hickling Broad in Norfolk at the end of August, providing firsts of Common & Green Sandpiper, Marsh Harrier and Crane. Finally, my first ever Waxwings in Hedge End rounded it all off in December.

From a non-bird viewpoint, the best was definitely the ridiculous numbers of Smooth Snakes seen during the ARC friends day walk on a Dorset heath in September, alongside all the other UK reptile species bar the adder.

Macro Madness – My 18th birthday not only gave me my first legal pint and clubbing night, but also my first macro lens. I’d always loved being able to get right down to the ground with my old bridge camera, crawling through meadows to capture wildflowers and grasshoppers at their own level, so naturally I wanted to continue this with my new SLR.

So below are my top three macro shots of the year; the frisky February frogs of my garden ponds giving their best ever profiles, a gorgeous Brimstone feeding on the nectar of the Summer wildflower boom, and a Common Darter ceasing it’s erratic flight to rest on a branch. At least till the next fly dinner comes its way… 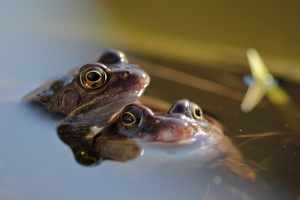 Springwatch Otters – Without a doubt my best British wildlife encounter so far. I’d known of a famous otter family in Dorset that emerged not only during the day in the town centre’s river, but in complete oblivion of people, for some time. If you saw the last series of Springwatch, they were the family followed by Charlie Hamilton-James. And now I had a driving licence. So, one fine June day, I made a carefully-planned slot between my A-Level revision I made the 45 minute journey to the otter’s haunt.

From the moment I had parked behind the Tesco, gathered my camera, tripod and binoculars and headed out to the first stretch of river, there was already one local standing by with bins asking “come to find the otters then?” And so began a hectic 20 minutes or so of rushing up the river, each time told by a photographer or dog walker “they were here about five minutes ago, then swum up that way”. As I progressed away from the town into a more wooded stretch of riverbank, I was beginning to lose hope. Until my heart jumped at the sight of a tail dipping in the water below.

A few steps further, and the trees parted to give a clear view of the river. And within this view, the mother otter and her two mature cubs stayed for what may have been 15 minutes but seemed like hours, in an experience where you feel shifted from your own world, gone through the looking glass and into theirs. The three would dive for fish independently, disappearing in a stream of bubbles only to reemerge gnawing on a fish with huge satisfaction. After doing this every couple of minutes, they would regroup and swim together in a paralell trio, then dive simultaneously and begin again. As they progressed further upstream till they were black bobs in the distance, I just wanted to dive in and follow them. 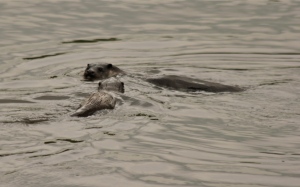 Madagascar – With A Levels finally over, there was only one way to celebrate and kick off the gap year: A two-and-a-half week expedition to one of the world’s official biodiversity hotspots with some of the most fantastic, unique and rare wildlife around, Madagascar. My time of the Island was a field course arranged by my college, managed by Operation Wallacea, a fantastic research organisation that utilises student aid among top academics in conservation research. We spent time doing both forest surveys in the Western dry forests of Mahavamo, and reef ecology in those off the island of Nosy Be: Both have had little assessment of their biological value, but both are also being destroyed to the oblivion of the local people who simultaneously depend on them for survival. The forests the victim of intense slash-and-burn agriculture, and the reefs pollution from agricultural run-off.

OpWall’s research into the biodiversity of the sites and the carbon storage capacities could be the only way these places are saved for both wildlife and people, so this wasn’t just any old sightseeing trip. Our survey walks to look for lemurs, birds and reptiles (not to mention mist netting bats and small mammal traps) were all crucial parts of the equation, and gave us a real chance to live out in the wild. Camping out in the forest is one thing, but even if a rice-and-bean diet and long-drop toilets aren’t immediately appealing, the satisfaction of switching to back-to-basics mode really does restore the soul!

To have seen the leaps and cries of Coquerel’s Sifakas, the Malagasy dawn chorus of a like that sounds alien to our ears, held the remarkable chameleons and leaf-tailed geckos in my own hands, witness the appearance of a shrew tenrec from a longworth trap and even aid the discovery of a new species of snake are memories that will stay with me forever from this magical island. I will return, but I suspect it will not be in the near future. I can only hope that just as much natural wonder is still around then.

Wild Norfolk – A few days in Norfolk following my brother’s spectacular wedding in August was a chance to see some of the equally spectacular wildlife this county has to offer. Seals by boat at Blakely Point, followed by Marsh Harriers and Spoonbills only ten feet from the hide at Cley Marshes; and don’t get me started on the wonderful wildfowl, Swallowtail Butterflies, Peregrine Falcons and Cranes at Hickling Broad. On par with Scotland I think for the UK’s top wildlife destination.

Work Experience at the Cornish Seal Sanctuary – To get to know an animal is one of the greatest privileges around; and by the end of my two week placement I was already wishing I stayed longer as it was amazing just how much I did. There were the grumpy but obliging old grey seal bulls Flipper & Yulelogs, the labrador-like bouncy fur seals Chaff & Andy, and the sneaky short-clawed otters Starsky & Hutch. Stan the sheep too, who convinced me that sheep actually have some of the liveliest personalities in the animal kingdom. And probably the saddest to say goodbye to was the Sija the common seal. Not only was she incredibly intelligent, trained to wave and touch the end of your boot with her nose, but the most mischevious of her more ‘chillaxed’ companions, Luna and Babyface.

Checking the flippers of Yulelogs

Those were just some of the many characters from my short time at the Sanctuary, and that’s not getting started on the rescued seal pups in the hospital ward. But since I’ll be living only 25 minutes down the road next year when I’m at uni, I’ll be sure to return to say hello.

Interviewing Sir David Attenborough – Need I say anymore? My first article for the Independent’s blog site was to speak to the god on his upcoming 3D motion picture, and I can clearly remember my simultaneous awe and shakiness upon going in to meet him in a backroom of a Fulham cinema. “First off, I just want to say your my all-time hero, so I might be a bit shaky to start” was my fumbled disclaimer to him as I hastily tried to get my dictaphone working. “My pleasure” with a smile was his humble reply, and as soon as my questions started and the answers followed, it was like being back in my living room with Sunday tea aged 4 watching ‘Life on Earth’ all over again.

Afterwards, I managed to get a quick chat about Durrell, The Diversity of Life and a signing of my nature diary. “Wow… even at your age, I was never quite this concise!” he mused as he flicked through the pages.

Nature Matters – As I woke up on the day of this event, run by ‘New Networks for Nature’ in Stamford, I had no idea just how overwhelming it would be. A genius idea of a celebration of nature in all it’s forms; science, literature, art, music, with all the appropriate speakers; that alone was worth the train fare and ticket price. But I didn’t expect to get to meet and know so many fantastic people. After making a point during the ‘Question Time’ panel on young naturalists, my ‘cover was blown’, and soon enough I was thrown into the world of the naturalist community. It’s an event I look forward to attending next year, and I hope you can too – it’s going to get big.