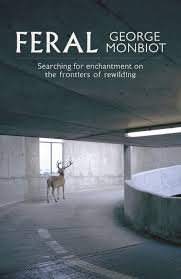 It was last Autumn that I read one of the most exciting pieces of natural history literature I have yet come across, The History of British Mammals, by the great mammalogist Dr Derek Yalden, who very sadly died earlier this year. Although it is a proper scientific text aimed at those with a keen interest in our native mammal fauna, it read like any great literary epic in my mind, chronicling the changing fortunes of our mammals from the Ice Age to the present day – and it’s what it had to say on the great megafauna that roamed our isles right into historic times that caught my imagination in the same way any piece of fiction could. The idea of wolves, lynx, wild boar and more roaming the woods beyond my garden once upon time has always fascinated me; complete with archaeological records and evocative illustrations, The History of British Mammals brought this almost fairy-tale like wild past into fantastic reality.

Now hold on, you might be saying, this isn’t a review of The History of British Mammals. But Feral is reads like a spiritual sequel to HOBM, and not just as a frequently-referenced citation. As a zoological reference point, HOBM had little opportunity to explore the wider implication of this untamed past of Britain – but with Feral, environmentalist George Monbiot does so with inspiring style. Of course, talking about the large mammals that used to be numerous in our countryside and the opportunities to bring them back is only a small part of Feral‘s mantra (it’s not just mammals anyway – just ask the giant sturgeons or dalmatian pelicans). For Feral is really all about accepting the true state of nature in a nation where it has become a distant commodity to be pruned and cut to anyway we see fit, regardless of whether we are trying to exploit it for commercial means or ‘protect’ it without really knowing what we’re protecting. The key word of course is ‘Rewilding’, both of our natural history and ourselves.

As the future of conservation progresses into the 21st century, rewilding has become one of the most notorious much-talk-little-action topics. Being so relatively recent and ambitious in scale, it can often be hard to dictate what it actually involves (though many conservationists in the field base it around the ‘three Cs’ concept of Cores, Corridors & Carnivores). Simple in principle – let a large area of land go free of human intervention and let nature take course – but where, why, how? These are questions that Monbiot takes time to explain thoroughly through his own strategic plan of rewilding the UK. Despite what you may think, Monbiot notes that there is room for wilderness in this crowded isle, and we can make it work, as other equally developed countries in Europe have shown. These lie in the the remote upland areas of the country, such as the Scottish & Welsh highlands.

It’s the latter that Monbiot takes a long, hard rant against, citing how these hills garner vegetation little higher than the ankle or knee at best. The culprit is Monbiot’s much-maligned ‘white plague from Mesopotamia’, the sheep. These woolly menaces leave ecological devastation reminiscent of cleared-rainforest cattle ranches that many Britons somehow think is natural wilderness, whereas the ‘real one’ is suppressed from growing by EU policy that states hill farmers, which already farm a ridiculously unproductive area of land fuelled only by subsides that take millions worth of taxpayer’s money, must inhibit growth of any ‘invasive plantlife’ (ie, higher than the knee). Monbiot’s analysis of this is perhaps the most thought-provoking section of the book, his revelations as to just how non-sensical this regime is blended with enthusiasm for showing what could be done were the sheep to go, such as the work of Trees for Life; whilst his visit to the sheep farmers whose livelihoods and history could be gone in a heartbeat were rewilding to go ahead create a strong devil’s advocate to such dreams.

But it’s not just the sheep farmers that Monbiot is controversial about – fellow nature conservationists fall well into the firing line too. After being taught the ecological benefits of upland moors, boggy heaths and lowland meadow for so long, it’s strange to realise just how comparatively lacking in wildlife they really are compared to wildwood – the ‘rich biodiversity’ wildlife groups manage such land for tend to be a few butterfly or wildflower species for example. It’s the part of the book that will leave most naturalists really starting to evaluate whether this national trust approach to conservation is really the best large-scale way of doing things. There’s certainly a place for chalk meadows and rough grassland in areas of heavy agriculture, where such ‘wildlife-friendly’ farming is the only alternative, but how do we draw the line? The naturalist Peter Marren, in his review of the same book in British Wildlife Magazine, states “Without bare downs and heather moors, and even sheep-grazed dales and hillsides, a lot of our plant and insect species would lose their habitats. Dreaming of big beasts is intoxicating stuff, but it would be a hollow victory to have Wolverines back in our woods but no butterflies, and no primroses, either.” The likely similar views of most of our conservation NGOs would be intriguing to hear.

In summation, Feral comes as close to a literary great as a natural history non-fiction can be (regrowth on coppiced trees is a defence strategy against damage from primeval elephants – magical stuff), taking an incredibly exciting conservation concept and wiping away any doubt of whether it was merely fantasy through Monbiot’s convincing arguments and unabounding enthusiasm. There are many who will describe rewilding as over-ambitous, impossible and inconceivable – when you’re talking about wolves and bears roaming around Wales once more, that isn’t surprising.

But the greatest successes in wildlife conservation were impossible and inconcievable once. In a restless country that needs both a more effective method of preserving nature and bringing the wild back to an urbanised population, Feral stands as the first call to an ecological revolution – quite literally, it reawakens something ‘feral’ inside your own soul, leaving you craving for forests where you can walk a day without a break in the canopy, where wild boar & beaver enrich the ecosystem once more through their feeding habits, where wolf & lynx could be behind any corner, unseen but so very much there. Up there with other revolutionary natural history texts like Silent Spring & The Diversity of Life, Feral is a must-read.