Firstly, a quick apology for having been a bit silent within the blogsphere over the last few months. New articles stopped coming in pretty much the moment I started my first year at university, and the time between then and now has essentially been trying to make some structure out of the multitude of things going on, both within the course and commitments outside it. With a new year however normal service is beginning to resume, and my resolution is to try and update the blog, both here and on the Independent, as frequently as university life will allow – but even if it does get a bit slow, each new post will at least try to pack a punch!

With that out of the way, it’s on to the issue of the moment. The weather.

That stalwart of British conversation starters has moved beyond the realms of small-talk and into the throes of political and environmental debate over the last month. You’ve all seen the footage of flooded farmland on neo-biblical proportions, miserable people wading knee-deep through town centres and even more miserable journalists standing outside in the deluge with little more than an anorak that would be small on Paddington Bear (can’t they at least give them umbrellas?) Regardless, Britain’s been a lot wetter than it should normally be, and politicians have been searching for all sorts of excuses as to why, while the environmentalists know why and wonder why nothing was done about it.

If you’re talking about the heavy rain itself, well that’s just one of the extremes in weather science tells us to expect from climate change – but that’s another topic for an extremely long article. The major bugbear has been the extortionate levels of flooding, and most scientists and advisors with sense realise it’s due to the inadequate ways rivers and catchments are maintained upstream in rural areas. As it stands, our bare uplands lack the vegetation required to absorb rainwater rather than have it run-off, too many of our floodplains are drained, and many of our water courses are too rigidly canalised.

Issues like these have shifted from the media to debate in the commons thanks to George Monbiot (see ‘Drowning in money‘), yet despite promising talk of reforesting upland areas and encouraging river rewilding (from the mouth of Owen Paterson, the environment secretary failure extroadinaire no less), talk has shifted back down the sense scale faster than a flash flood in Somerset, with David Cameron encouraging dredging with open arms. Mere days after it was dismissed in parliament as both ecologically destructive, and very useful at causing floods downstream.

Continual draining and run-off from agriculture will continue to produce significant floods, yet many alleviation programmes, such as afforestation, don’t take place overnight (As travesties such as the badger cull have shown, patience doesn’t seem apparent in environment ministers). There is however one natural solution that once established, would have a swift effect and do it all for free.

I’m talking about bringing back beavers. And not surprisingly, other conservationists feel this is the perfect time to bring this issue back into the frame.

Perhaps not the most orthodox choice, and I can see why it’s taken so long to suggest this – suggestions about ‘x technological method of flood prevention for £x over x years’ sounds far more serious and directional than suggesting a mass-release of giant rodents. But as anyone who’s seen a beaver dam will attest, beavers create serious new wetlands that create huge catchments of water upstream. In these reservoirs, water is released slowly, and the rapid flow that creates floods in the towns below is negated. 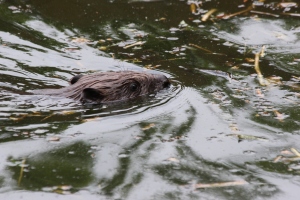 European beaver, photo taken in England, but of a captive individual at the Wildwood Trust. How long before these kind of shots can be taken along the Thames or Itchen?

I’ve always been strongly in favour with beaver reintroduction, but since my visit to ecologist Derek Gow’s farm in September, I feel it should be one of our priorities within UK nature conservation. Derek has a family of beavers on his farm left to themselves, and they’re largely there to prove to farmers that they aren’t apocalyptic beasts of destruction, but animals that we can easily live alongside, and even benefit from.

Yet as Derek told me, the beaver is a test of our bravery in conservation. We know what it does and the benefits it brings, yet because it has an influence in changing the structure of its environment, landowners will generally stamp down their feet and say no. If we can’t look beyond the occasional flooded pony field and take in the wider benefits beavers create in ecological restoration, flood defence and water purification, we will never achieve any more dramatic rewilding proposals. And quite frankly, if nature conservation here stays the way it currently is, it’s all a bit doomed.

So it seems that now is the time for that test. Let the government and our farmers see how easily even urban populations can live alongside beavers in Europe, and how effective their wetlands are at holding back all that water that would otherwise be spilling out into homes and drowning taxpayer’s money. We can’t afford to say ‘no’ now without any further thought.

Let’s make the first of many ‘crazy’ moves in conservation, and restore the beaver to our shores at a time when we need it most.