‘Fssh, fssh, fsssh… fssh, fssh, fssh… fssh, fssh, fssh…’ if you’re a bit confused, which you are, that’s the sound of one of the most amusing and quite simply nicest wildlife moments of last year. A badger was shuffling backwards with a huge heap of dead leaves between it’s back legs and forepaws in a characteristic manoeuvre, resembling a cross between a dog trying to relieve itself of worms and a drunk doing the rowing dance to ‘Oops upside your head’. Once it had descended into its sett to dump this load of fresh bedding, it was back outside to repeat the process continually for at least another hour and a half, providing a constant source of entertainment on this evening’s sett watch in the New Forest. (Which reminds me that I need to send over last season’s data to the badger group by the end of the month – sort that out later)

2014 was yet another year in a trajectory of increasing annual awesomeness that I hope doesn’t stop anytime soon. Another year which has been more eye-opening, full of adventure, new people, knowledge and progression than the last. This has been the case (bar a couple of real dud moments) personally and emotionally, but as this a wildlife blog rather than one on lifestyle, love and instagrammed pictures of meals, it’s what I’ve gained from my natural life’s calling that provided the real fruit of what to write home about.

If there was one thing you notice as a conservationist, it’s that as each year builds up on your understanding of the issues we face as they become more far more prevalent. As a result, you can either become more depressed, or more invigorated to fight harder for it. For most it’s generally a mix of the two, though thankfully with a leaning more towards the latter. These are feelings more thoroughly explored in this post from September, and my new role within the committee for youth conservation movement ‘A Focus on Nature’ certainly put a great emphasis on this throughout the year, all boiling up to our rather splendid gathering of over a hundred young people speaking up for nature in Cambridge on the 9th September.

This year however, there was a particular defining moment that summed up exactly what nature could achieve if we just stepped up a bit more for it. It wasn’t a conference, or a discussion, but four weeks of my life carrying out wildlife research in the Tanarva Mare region of Transylvania.

Here was a landscape barely changed since the days it was being battled over by Saxons and Turks – beyond the quaint valley-bottom villages with their playbox farmyard-homesteads, rolling wildflower meadows bloomed with a pyschadelic blossom of innumerable creatively-named flowers and orchids. Wasp spiders wove their webs between these, and every footstep was an arthropod firework of bush crickets and grasshoppers. Rasping calls of red-backed shrike pierced the heat haze of a burning summer afternoon, replaced by the crek of the corncrake come the cool descent of evening. At this time, all kinds of creatures would come a stirring from the slumber from the shadows of the woods above – including the great brown bear, a creature faded into fairytale for us but very much a regular suspect in these foothills. 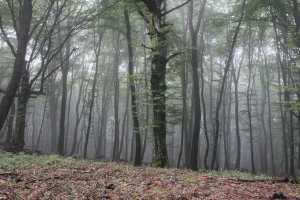 The key word to sum up the wildlife of this region was ‘plenty’ – but what made this place stand out from other parts of the world I’ve been to, equally bounteous in nature, was how it could well have been Britain not so long ago. Plants and animals we know well and take for granted from our countryside lived plentifully alongside those we now regard as rare or threatened (such as the swallowtail, sand lizard, pine marten and woodlark) to those we’ve completely wiped out back here – stand up bears and boar. Yet this was no civilisation-less wilderness: it was somewhere people were living and working in close commune to nature, be it grazing their family cattle upon the meadows or cutting oak and hornbeam for the homestead in the hill-top woodlands.

My time in Romania showed me what I wanted nature in the UK to be. We don’t have to take this literally and go back to medieval methods of ploughing fields with horse and cart, but if we just take a little less and work out a better balance between wildlife and what we use the land for, we could have fields full of birds, invertebrates and wildflowers again – one day, maybe even woodlands in our uplands, with some of the missing great beasts reinstated, may even make a comeback. My point being that anyone seriously trying to defend the natural history of Britain should at least visit the Tanarva Mare or somewhere similar, for then they will see the physical form of their argument. It’s certainly set me up for 2015 and beyond. Who knows where conservation will take me, or what I’ll have seen by this time next year, but at least I have a vision of what we could aspire to – something I think our wildlife would certainly thank us for if they could. 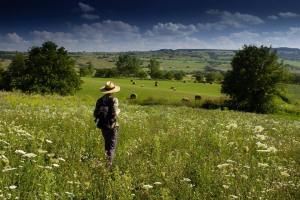 With the exception of that housekeeping badger. All it wants this year is a clean bed.