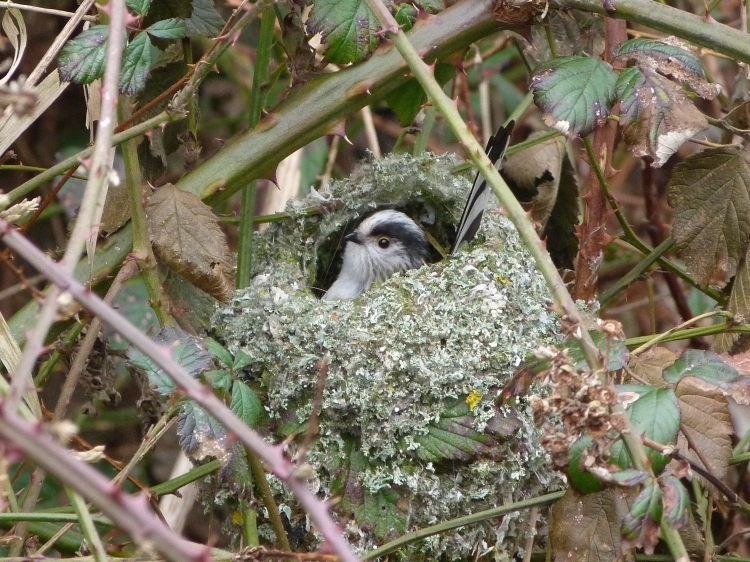 I’ve witnessed the slow coming of Spring 21 times now, yet the passage of time, of which a large part of it seems to have been spent in a perpetual waiting-room gloom of winter, makes it seem as fresh as if it were the first. I’ll probably keep writing about it each year too, and you can add ‘groan at Pete’s unoriginality’ to seasonal staples like Christmas, Eurovision and a new series of Game of Thrones. But as it is in my view the most wonderful and obvious illustration of the shapeshifting face of nature, it’s a tradition I’m happy to keep up, as each year seems to bring a new perspective to it.

No sooner have I crossed the terrifying B-road of death and gone through the gate into College Reservoir nature reserve, that I am welcomed by the twittering of songbirds, like the sudden wall of chatter one encounters the moment they enter a pub. A curious robin peered and bobbed around me methodically from branch to branch, perhaps in expectation of a mealworm or two to be launched from my pocket. To it’s left, more delicate ‘seeps’ and flashes of black, white and rusty pink could only mean the presence of long-tailed tits.

Fixing my binoculars on one of the pair proved difficult – the birds seem to resemble feathery ping-pong balls not only in shape, but also locomotion. Once they stayed still for long enough however, I could see how dashing the increasingly brighter sunlight of Spring cast them, and on a less poetic note, inspect they’re legs to see if they were ringed – many of the songbirds in this area have been mist-netted and subsequently adorned by academics at my university. While this was not the case, I noticed tiny pieces of lichen in their beaks. To my delight, I watched as each bird in turn flew into the crux of a gorse bush, where bit by bit a very comfortable looking nest was being constructed.

At this point it was similar in size and shape to half of a large orange, made out of particularly fuzzy mosses and lined attractively with the lichens being gathered. As one tit returned with new material, it was locked and stitched in with the precise care of someone brushing out the folds in a newly laid bed-sheet, and it would then turn around and vigorously shift up the moss with its backside. Eventually this nest will form a neat, rounded dome to form what is perhaps one of the most charming of all bird nests. Although I could not see any myself, long-tailed tits are famous for lining their homes with spider webs, the strong and sticky silk providing ideal natural foundations.

After checking the stream below for otter spraint (none today) and a quick scan of College Lake (couple of grey herons, groups of teal, coot and canada goose), I made my way back through the woods towards Argal Reservoir. Both College and Argal are man-made lakes built to fulfil a functional purpose in water supply, and standing on top of the dam wall that gives you the best panoramic view of the latter gives you a humbling sense of the engineering ingenuity that has created this, water tumbling over a 50 foot drop from the sluices beneath your feet.

Despite the dam initially appearing like another triumph of utilitarianism, the reservoir has created ideal habitat for waterbirds. Scanning the horizon with my binoculars, what appear to be model viking longboats from a distance reveal themselves to be great crested grebes, their swooning necks and handsomely feather-crowned heads occasionally disappearing below the water line on foraging dives for weeds. At this time of year pairs will be courting with their famous, synchronised dance. I kept my eyes fixed on the birds, but of the four in view, none seemed interested in ‘setting a date’.

What appeared to be a tiny missile suddenly zoomed over the middle of the lake. Focusing my binoculars onto it, it’s identity became obvious as it drew nearer, the dark silhouette caught in the glare of sun-upon-water turning to a rich, azure blue. The kingfisher ascended higher than I have ever seen one go as it reached the dam, before shooting down the other side towards College Lake. A kingfisher always brightens a day, but apparently this was just the first act. Turning around to face Argal again, two of the grebes decided they did like each other after all, and lined themselves up so symmetrically they almost appeared to be one organism. Both of their distinctive crests were flared sideways like feathery satellite dishes, with two tufts sticking out antennae-like on top. As they flicked their bills from left to right in synchrony, I knew the dance had begun.

Swimming in parallel, the two skimmed along the surface for several metres before diving together and re-emerging some distance from where they initially disappeared. This would be repeated around three times, after which they drifted apart some distance in the opposite direction. Then, turning to face each other again, they folded and hunched their wings in a v-shape and lowered their heads to the surface in a process that for some reason reminded me of aircraft moving slowly in taxi. The methodology of this streamlined shape was made clear as they suddenly raced towards each other, and inches from the point of collision, suddenly lunged their bodies towards each other and begun the head shaking beginning set anew, with plenty of bill shaking in the air and ducking their necks up and down as quickly as they could without physically decapitating themselves. Such vigour was put into this that I half expected sparks to fly.

The question of whether love as humans know it exists in the wider animal world is a difficult question, and will probably make a biologist either scratch their head or laugh. But what drives the impetus to work together to create such an intricate nest in the case of the long-tailed tit – is it simply the need to get eggs laid quick? Or what sculpts the precision, complexity and sheer electricity of the great-crested grebe’s courtship dance? We’ll never know unless we’re actually the animal I suppose, but perhaps there is more to it in pair-bonding species like these. 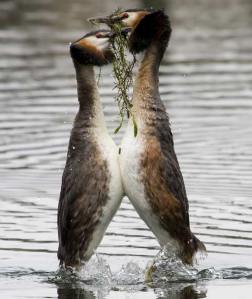