It’s nearly 3am, and the local crickets and cicadas are probably feeling rather put-off by the fact their regular chorus at this time – a continuous buzz and fizz like a convention of sewing machines and buzz saws gone haywire – is for once being overshadowed by the holler of humans up way past their bedtime. The porch lights at the gates of the centre illuminated a lazy gold-orange glow on proceedings, which was beginning to resemble something like a nature conservationist Dunkirk. The barks of requests for ID, water and a microchip bounce around the warm night air of the Forest, wooden crates lie scattered across the gravel where one by one they are hauled onto a battered old bus waiting in the gateway, and only two or three of the team of 15 or so people seem to stay fixed to one spot.

Though my body was used to being in deep sleep by now, the rush of the moment kept my mind as active as if I had received shots of espresso to my bloodstream. I went from crate to crate with a rapidly decreasing load of water in a plastic bottle, pouring it into cups hooked to the inside of the boxes, and then going back to crates waiting to be loaded to double-check they’d received water in the midst of the rush. Occasionally I’d find myself called over, and sent to delicately lift out the occupants of these boxes for one last health check. In between my hands, a football-like sphere of brown scales that could be mistaken for a giant seed-pod or other earthy product, until from the centre a naked, elongated, almost canine face and a pair of tiny stumpy feet ending in heavy curled claws unravels itself. Tonight, we’re giving 20 Sunda pangolins a second chance.

A Sunda pangolin (Manis javanica) about to undergo a vet check.

That was one of several experiences that will stay with me for a lifetime while working at Save Vietnam’s Wildlife for a month – a taste of what really difficult conservation feels like, in a part of the world where there isn’t much of an existing bedrock of support for the concept in the first place. The pangolins are the world’s most trafficked mammal, and yet hardly anyone knows what they are compared to say, elephants and rhinos. (The plight of the pangolin is not something I’ll go into too much detail here – but for the background, I’ll direct you to National Geographic).

As well as the curious pangolins, looking like the result of a night of passion between an anteater and an amorous pinecone, an even more bizarre suite of carnivores are under the protection of the team. None of the charismatic suite of animals most people associate with the word ‘carnivore’ – no big cats or bears (on a sad note, there’s probably less than 30 tigers left in Vietnam, if they’re still in the country at all). All face similar problems to the pangolins, confiscated from the illegal wildlife trade. There’s the Owston’s civets, an endangered species virtually endemic to Vietnam that with their prehistoric-looking coat patterns, satellite-like ears and goggling eyes peering down a porcine snout resemble a Martian’s cat: the HQ of SVW has hosted a captive breeding programme for these species for over 20 years. There are great shaggy binturongs or ‘bear-cats’ with their characteristic odour of warm popcorn, leopard cats not much bigger than your household moggy but significantly more intimidating, and solitary, eccentric looking masked palm civet and small-toothed palm civet to boot.

Hoi Anh, one of the centre’s curious binturongs (Arctictis binturong)

Protecting the aforementioned ‘picture book’ large mammals is difficult enough as it is with the corruption and demand level, so you can imagine the difficulties faced by one small team operating out of Ninh Bin province’s Cuc Phuong National Park, working with creatures not even graduates in zoology may have heard of. On top of this, the culture in Vietnam tends to perceive animals as a crop or commodity – their welfare just isn’t a thing. So just as you can cram 20 piglets into a 3x1ft basket on the back of a motorbike, and keep goldfish in flower vases on café tables (both things I observed), throwing as many pangolins as you can find in the forest into netted bags like potatoes, destined for the dining tables of the highest in society*, is no matter. If you run out of pangolins, ah well. To the next forest. You can always pump the stomachs of the ones you catch with flour to increase the weight, and subsequently price, of the ones you catch.

Working against this way of thinking creates an Everest-sized wall of challenges for Save Vietnam’s Wildlife. How easy it would be to give up, accept it’s a practically impossible challenge and move on. But that’s not how conservation works, and for every pangolin released, every piece of research on their rehabilitation broken through, every school-child educated and who goes to tell they’re parents not to eat pangolin or snare civets in the Forest, it’s a small breakthrough to a bigger cause. They’ll inevitably be failures, not every happy ending will be met – but giving up completely would be so much more calamitous.

Perhaps it’s something we can learn here in the UK conservation scene – where despite having comparatively bounties more money to spend and a huge number of people who support it, we’re far more timid and ready to give up on projects that don’t meet the predictions of five-year strategy documents.

Wherever conservation is practiced, it’s more often than not a game about trying to overcome odds – something I learned in Vietnam more than anything. No matter the bureaucracy, the corruption, the challenges, sleepless nights, grant applications and finance hurdles: When you have a pangolin gently unfurling itself in front of you, eyes glinting and blinking like a newborn babe and gently treading forward to investigate the world around it with soft but quick snuffling noises as it probes each nook and cranny with it’s snout, you’ve fallen in love with an animal that’s been going about like this undeterred for 60 million years until now. Pangolins, animals, nature – they’re magic.

That’s why conservationists still go on, even when all seems impossible. Because of magic. 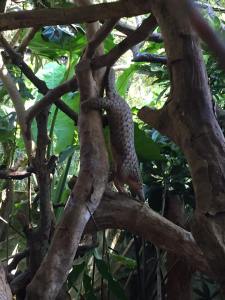 One of the pangolins exploring the Frank Wheeler ‘Pangolarium’ shortly before release.

* The fact that pangolin meat and scales is in demand from the growing middle and upper classes makes trying to get political support particularly tricky for obvious reasons.