This piece was written as part of the Naturewatch blog, a brilliant web nature series I’ve presented and currently script edit for university. See the original piece here.

In our latest episode of Naturewatch, we were joined by Nick Baker of Really Wild Show and Springwatch fame, a genuinely amicable and knowledgeable bloke, who certainly inspired me from a young age when his book of the wildlife year became my holy bible. But Nick, Liz and myself were upstaged by fellow mammals far smaller than ourselves, in the form of the co-stars we waxed lyrical over during our piece. 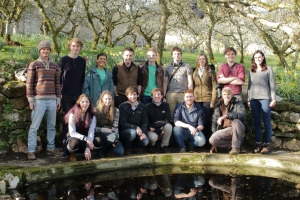 The mice, voles and shrews that scurry, burrow and snuffle through the vegetation are Cornwall’s, and the rest of Britain’s, most numerous group of mammals. Despite this, they remain elusive and unseen while we clumsy humans stampede past like walking tractors – even when we do see them, they are frequently quick and unlikely to hang around for long, as our Naturewatch camera crew found out to much frustration! To get a really good up-close view of these animals (and contribute to good science too), your best bet is to go small mammal trapping.

Before you do, if your experience in the practice is limited or beginner, ensure you’re doing it with someone who has the know-how and holds a license to trap shrews – as this practice involves maintaining good animal welfare, you want to ensure any captures you get are as healthy and stress-free as they can be. One of the most common and efficient traps to use – including the type we used on Naturewatch – is a rather wonderful steel contraption called the Longworth trap, which consists of a detachable tunnel and nest box. The latter is filled up with warm, cosy bedding such as hay and bait to ensure you’ve got something to entice the critters with and a tasty meal for the night: seed mix for mice and voles, and plenty of fleshy blowfly larvae (casters) or dog/cat food for shrews, topped up with apple for fluid, provides a satisfying evening a la carte. The traps all set, well covered and insulated, usually in a hedgerow type feature (the animals use these as corridors across the landscape), you can leave them open overnight to return early the following morning to see what you’ve got.

In the UK, the possible capture candidate list is relatively small, but makes the animals easier to ID and understand. Wood mice are likely to be the most common creature you catch, who will often erupt out of the trap as if they’ve been spring loaded upon opening the trap into the bag, and are easily distinguished by their large eyes and ears, long naked tail and kangaroo-like back legs which gives the power to their amazing in-bag acrobatics. If you’re trapping in woodland areas across Central to South-East England, you may also catch the very similar Yellow-necked mouse. The giveaway here is in the name, as the species has a distinctive gold collar along the bottom of the neck, but it is also as hyperactive as Usain Bolt on several espressos – even those like myself who’ve been trapping for a while find these a difficult animal to wrangle if you’re trying to handle them to record data.

The two vole species you can catch are a bit trickier to discern. Both have smaller eyes, ears and tails compared to the mice at least, but comparing the two requires a finer eye – the generally more opportunistic bank vole has a distinctive russet-red shine to the fur on the upper half of the body and a tail that is about half to a third of the body’s total length, whereas field voles are a blonde-brown colour and have a very short tail that’s often little more than a stump. They’re also a bit chunkier than bank voles and have smaller ears, though this takes a bit of regular capture to notice. Whatever the species, due to their high intake of grasses voles frequently leave their traps littered like a festival toilet, the animals often smelt inside well before they are seen!

Shrews are delicate animals to trap, and if they can’t replenish themselves with fleshy food roughly every three hours in the trap there’s a very real risk of them not making it – hence why a licence is required to trap these guys, and less experienced trappers may use the addition of shrew-sized escape holes to avoid this. On the UK mainland, we have a handsome selection of three shrew species to catch: the largest is the water shrew, dark brown or black in colour with large webbed toes perfect for diving down in search of aquatic beetles. Despite this however, it can often be trapped miles from the nearest water source. Common shrews and pygmy shrews can also be difficult to distinguish unless you catch them together and can compare sizes, but commons tend to be three-shaded with dark brown fur on top, lighter brown down the sides and pale on the bottom and have a tail about half the body length, whereas pygmies have a stark grey-brown half on top, white on bottom and a rather hairy tail that’s about two thirds the length of the body. Interestingly, the Naturewatch crew found pygmy shrews in the unusual location of a rocky beach while filming the introduction to our new presenters! But it isn’t unheard of – particularly for the Lesser white-toothed shrew, which in the West Country is only found on the Scilly Isles where it frequently forages within the shore.

And if you’re really lucky and are setting traps in reed beds or rough grassland, you might even catch our smallest rodent, the harvest mouse. It’s scientific name, Micromys minutus, literally means tiny tiny mouse, and with a prehensile tail for climbing stalks it lives almost entirely above the ground during Summer, where it builds thick, tennis ball sized nests out of living vegetation. No one quite knows if this species is declining in the UK or not. Much of its seemingly favoured habitat has been lost, but there just isn’t enough data available on their numbers – so all the more reason to get trapping!