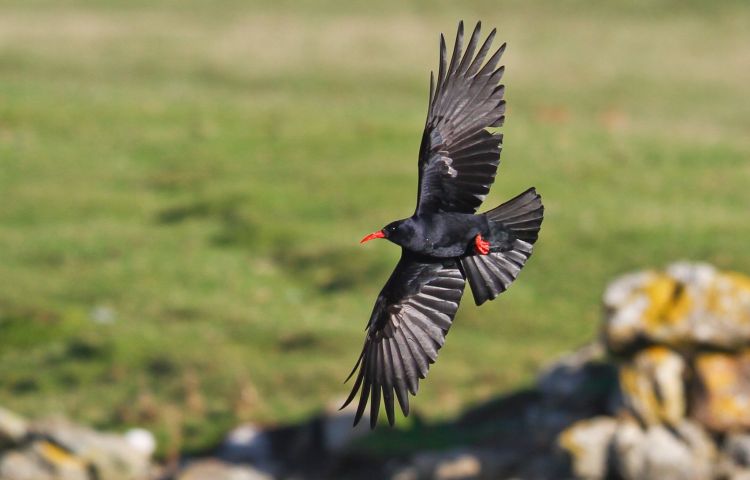 I remember as a child always being fascinated yet somehow let down by those beautifully painted dioramas; the ones that adorned double-page spreads in my nature books, and even the laminated mats my parents slapped below my plastic dinner plate to spare the table from baked-bean stains. A snapshot of a beautiful piece of British countryside, with animals spilling across the scene. They gave the impression that stepping outside would result in spotting hoards of wildlife while barely having to crane your neck.

Of course, reality is never as simple. But this day on the Lizard Peninsula, Britain’s most southerly point comes pretty damn close. Against a summer’s sky that has snuck into October and the churning Atlantic below, the movement of wildlife on this panorama of blue cavorts through the frame like the emboldened cast at the finale of a West-End musical. For once I am witnessing something close to a dinner-mat diorama of a British west coast cliff-top.

The black-headed gulls and jackdaws form the bulk of the chorus, riding the wind, chacking and wooping. In the grassy bank beside me on the coast path, the field grasshoppers and grey bush-crickets complement this by extending their summer prom, stridulating their one-beat rhythms in a glorious pool of heat where the sun has fixed its light.

I can barely register the kestrel who has leapt forth from the granite boulders, before the jackdaws turn their attention to him and set off in hot pursuit at their perceived intruder.

Not that it concerns the turnstones and oystercatchers, so far below on the rocky shore you can just pick them up without binoculars. Way down from the crowds of elderly couples and courting younger equivalents (for this is the peak season for those who avoid the over-abundance of families in the summer) who leak out from the car park and tea shop at the peninsula’s head, they are at liberty to hop the breaking waves free of their typical paranoia.

And then the ravens! A pair that drift over in silent gothic awe, that would not look amiss if accompanied by the eerie hum of Gregorian monks. The kestrel has left, so the jackdaws turn their mobbing priorities here instead. But a single spark on the waves has given away the grey seals now. Relaxed as a sumo in a sauna even among the wild waves, the enigma of their vanishing act when they take a dive is all but tarnished today by the light, which gives away silver shimmers of blubber shifting in size and shape underwater.

Being Cornwall, the epic show-stopper could only be one thing. As my thoughts drift to whether these birds will show up, a resounding cha emanates from the ancient rock faces on the cliff. Enter stage left, the choughs.

Flying dead centre through my eye line, they steal the show. Choughs were claimed as a stark emblem of the Cornish even when they flew widespread all the way to Dover, and here at Lizard Point, it has become a near sacred site for their followers since the first pair recolonized some years ago.

I’m tempted to romantically liken the joyous cheeow cheeow the three choughs exalt as victory cries. But of course they have no knowledge of the story we have filtered our perception of them through. We see these birds back in this landscape and rightly celebrate it, though the jackdaws we ignore in comparison are living life to the same standard. For the choughs, it is just a perfect day to dip and rise up hillocks within the wind, an invisible roller-coaster track in the air.