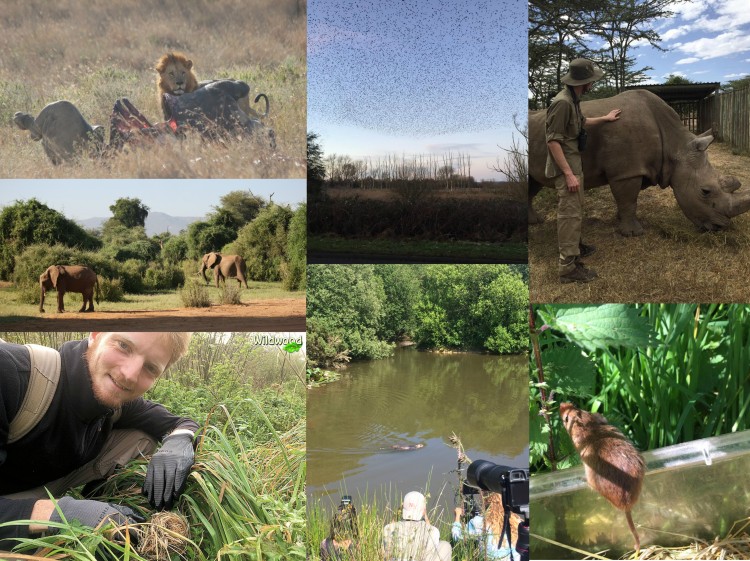 A selection of 2017 highlights

Like every year of a naturalist, there’s a fair few encounters with wildlife that stick out particularly notably as I look back over 2017 (and of course a fair few personal ones too, but this is a nature blog not a lifestyle column).

There’s returning to Kenya at the very start of the year with my MSc field course, where I met the last Northern white rhinos in existence and discovered the heaven on earth that is Samburu. There was spending the best part of Spring and early summer tramping down the wild river valleys of East Dartmoor, collecting that most noble of treasures for my research project – otter shit.

Certainly up there was being involved in the Cornwall beaver project, a fenced release for which I was present on the day the animals were let out into glorious June sunshine. And 2017 was the year where I finally let go of the university safety blanket, thrown out into the world of work upon finishing my masters this summer. Probably the biggest shift in personal eras since I started higher education (or even education as a whole) in the first place, I’ve been lucky in that I’d managed to secure a winter contract working as probably the first ever ‘Devon Harvest Mouse Project Officer’. Working outside across the county, trudging through meadows and mires in search of the beautifully crafted grass-woven nests of these animals, and training others in the art of nest searching, has been incredibly satisfying.

But if there was one moment I had to pick for nature in 2017, and the year as a whole, it was a single night toward the end of August.

With our projects handed in, course-mates on my masters had just a couple of week’s blissful freedom before turning our attention to the real world. That bank holiday weekend had been the first in history where it had actually been sunny and hot, and down here on the south coast of Cornwall, Falmouth felt more like the south coast of France. As we scaled the steep, rocky footpath to the stony beach at Durgan, the shelter of the holm oaks and a still indigo sea created a distinctly Mediterranean feel.

With the sun setting, others on the beach were packing up for home as we set up shop, but that was the intention. To onlookers, it would’ve seemed like just another load of students doing what they do around here. Lighting a barbeque, draping blankets over an area the size of a small tennis court, and the sound of cans and bottles opening long into the night, when the haul of dry logs some of us gathered from the wood earlier was put to use as a campfire.

Every now and then, one of us would walk to the water’s edge, give it a splash, and frequently come back with a sigh and a shrug. Getting close to 11pm, we’d almost given up home of seeing what we’d come to witness, until one of our party on one of these ‘splash-checks’ started shouting back to us like an absolute loony.

“Guyyyyysss! You’ve got to come and see this! It’s AMAZING!”

By this point something of a ‘boy who cried wolf’ effect was beginning to take hold, and we rather sceptically walked towards the water’s edge to see if our friend was just getting optimistic.

One by one however, as we kicked the water, each of us realised that she was right, and that the further we waded in the more numerous they became. Before long, despite the cold we were all stripping down to our underwear and lunging into the sea, where one stroke of our limbs as we swam sent hundreds of the creatures up into dazzling fruition.

The water was lighting up, and it quite literally mirrored the starry sky above – only this time, the stars were plankton illuminated by bioluminescent bacteria. If you swept your arm like a scythe, it would trail a stream of golden green light, and sweeping your hand from the water would leave the microorganisms still glowing on your skin like glitter. All of this was met by whoops of sheer, unabashed ecstasy as we witnessed it, so that anyone watching from the cliff would think we were high on something a bit more illegal.

The truth is, we were literally high on life. Something as simple as a small chemical reaction in a microscopic organism was enough to fill you with euphoria akin to when you’re first figuring out the joys in reality as a child.

That pureness of nature is why I do what I do. Keep the magic going, best I can. As I step into my first full year as a conservationist in 2018, I look forward to seeing how I do.