I’d been meaning to recce this site for harvest mice for a little while now, having moved to Bristol a couple of months ago. Keen to make new connections like an over-enthusiastic fresher, I’d suggested to a local nature group I’d be happy to run a nest search session for the species, without having a single clue on where I might find them with their rather specialist requirements for untidy grasslands. This place was first on my checklist – a stretch of meadow about 4 hectares in size beneath a wooded hill in the Avon gorge, bounded between a railway line on one side and the A4 on the other. While much of it is short turf beloved by picnickers and dog walkers, the edges are grizzled with large grassy tussocks. Exactly the sort of unkempt stubble where a harvest mouse might feel at home.

I trudge across to investigate, the slight ringing in my ears still inherited from last night being drowned out by the sound of the road. It’s a fair punishment. I had only intended to go for a couple of pints with a friend, and spend a decent day out and about afterwards. But by beer number 4, we seemed to realise that at this middle ground of young-professional life, spontaneous nights on the town were becoming increasingly rare and would only become more frowned upon, leading to decisions that resulted in the evening’s conclusion at about 4am. At least by dragging myself outside to ruffle through some vegetation I’ve not entirely wasted the day.

Despite that, the search for nests isn’t going particularly fruitfully. Despite appearances from afar, many of the grass species here don’t have the stem strength necessary to keep nests in place, and those that do are relatively few and absent of evidence. Obviously that does not imply evidence of absence from this casual search, but I did have doubts about this spot. I dig out my phone, swiping my way through google maps to check out the surrounding landscape to assess how well connected it is with potential habitat (such is ecology in the 21st century). The answer is ‘not very’. Sandwiched between the city and the River Avon, there’s not much cover for harvest mice to move through, which has been shown to be a big predictor of where you find them.

I carry on looking, but perhaps not as determinedly as I might otherwise. There’s a few other people here swaddled in hats and coats, Sunday strollers and dog walkers. And then there’s me, stooped over and fumbling in the grass and probably being silently judged. Only the dogs aren’t as self conscious as their owners to point this out, and my only interaction with society is when four white terriers come over and start yapping. I can almost hear them say “mate, you do realise you look like a weirdo.”

There’s not much to see from Britain’s smallest mammal, but there do happen to be whales here. Two wicker sculptures of the leviathan’s head emerging from the ‘water’ of the meadow, and another’s tail fluke diving into the soil, make an impressive sight not only to the walkers but to the cars whizzing past on my right. I recently started working as a membership recruiter for the Avon Wildlife Trust, who manage this reserve, for 2 days a week as a way to fill the rest of my working time with something vaguely relevant. This basically requires standing with a stall at garden centres and coffee shops convincing new people to join, and being largely rejected. “Have you seen the whales at Clifton? That’s us.” Is one of the hooks to let people know who the charity are, and it’s something I’ve deployed myself a few times despite having never actually seen the things. They’re beautifully done, right down to the polished metal eye that stares dolefully back at me. Given the very first artistic expressions can be seen directly inspired by the natural world on primeval cave walls, I feel very strongly we should be blending far more creativity with science if we wish to encourage a wider connection to nature in society. There doesn’t need to be wicker whales on this reserve in the utilitarian sense, but I bet you more people feel attached to the place because of them.

With about half an hour till sunset (not that you’d notice in the overcast curtain), I cross over the railway bridge back through the arboretum on the hillside. Exotic tree species intersperse among the native woodland like art installations rooted in the earth, right down to the small ID labels at their bases. The lofty boughs have donated extravagant riches to the ground over the last autumn, and like otherworldly gifts exchanged by heavenly spirits or extra-terrestrials in a first contact story, they can hypnotise us mere mortals into ecstasy. As I fuss over a couple of whippets approaching me on the path, their owner stops to greet me with the sense of someone who’s just discovered nirvana after drinking some strong mushroom-infused tea. “Have you seen just how spectacular the leaves are?” says the middle-aged woman with giddy eyes, drawing forth a huge leaf from her coat pocket. Probably from an appropriately named bigleaf maple, and the colour of a dozen shades of red at once. It’s not bad for a leaf, so I agree with her. If anything, people stopping to tell you how great leaves are is something we need a lot more of in this day and age.

I’m pushing the light now, but I’m determined to make this unproductive day as worthwhile as possible. There’s a small meadow on the valley bottom with a patch of reeds hugging the railway line. I’m already convinced there are unlikely to be harvest mice here, but as this is decent potential habitat it’s worth a look. There’s nothing, but as an excuse to breaststroke my way through a reedbed it was a worthy excuse. On the edge of the reedbed, a sign showcases the oxymoronic relationship people have to this site. In the woodland above, full of exotic species to be admired in garden-like fashion, battles are being made by volunteers against ‘invasive’ trees ‘running riot’ like holly, ash and turkey oak. Only the latter is non-native. I chuckle to imagine the reaction of a New Zealand conservationist to two-thirds of that message, all while they desperately trying to restore their Pacific rainforest.

But the ancient world isn’t far away. As I pick and choose footpaths heading in the vaguely correct direction to my car in this unfamiliar place, I come across an oak of a huge diameter, perhaps five feet or so. Were the sun beaming down on the tree, it would perhaps look like a benevolent cathedral to all life that would give you esoteric advice if you pressed your ear to its trunk. Shadowed in mid-winter’s growing dark however, it would fit in very nicely in the title card of a 70s hammer horror film. 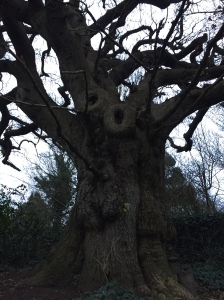 Being me, I can’t help pacing its circumference, trailing my hand along the deep crevices of its bark like the hide of an elephant with eczema. At one point, I can feel a wedge of dead wood buckle under my touch, and without really thinking I dislodge it as if levering off a scab. It crunches out of place easily, and on its underside lie dozens of woodlice. As more begin to stir at their disturbance in the half-light, it can be hard to tell what is decayed bark and what is isopod, so fundamentally a part of the oak these creatures seem. With a sudden hit of guilt, I jam the wood chunk back into its ‘hinges’, returning the critters back to their beloved darkness.

As I make tracks back to the car, I feel a lot better for not having spent this hangover in front of Netflix.