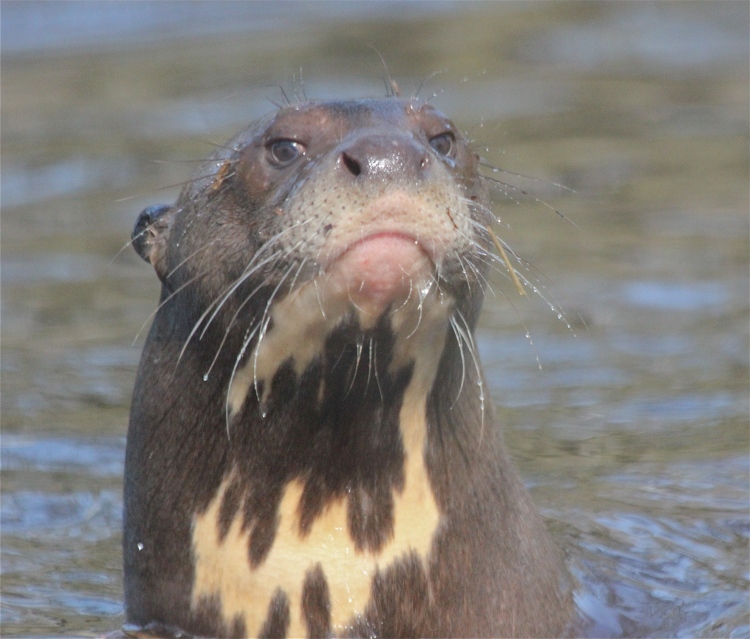 Truly one of the most bizarre, alien and incredible mammals in the World, the Giant Otter Pteronura brasiliensis is an animal that seems to be in a transitional stage of evolution between the rest of its otter relatives in the family Lutrinae and the far more aquatically-adapted pinnipeds (street name ‘seals’). It’s more spherically-shaped skull, oversized, goose-like webbed feet and huge oar-shaped tail and perhaps more obviously, its huge size of up to 6 feet long set it apart from other otter genera which, like the native european otter, have a much more weasel-like physiology. Another of the giant otter’s key characteristics is its vast vocal range of frankly weird sounds. From constant low purrs that sound like an electric Chewbacca to shrill ‘squelps’ like a radio going badly out of signal, these, combined with its appearance, would lead you to think it dropped off Mars.

Of course, it (allegedly) hasn’t, originating from the rainforests and great rivers of South America, including the Amazon & Pantanal. Here they hunt in huge family groups, the result of which leads to them becoming one of their ecosystem’s top predators; the nickname ‘river wolves’ is one rightly earned. Few animals dare to challenge them, even caiman and anaconda which may fall prey to these families, and they will happily munch away at piranhas; head first of course, so it can’t bite back.

But like most animals from the rainforests we seek to convert to agriculture or settlement as soon as we can, giant otters are yet another large predator classified as ‘endangered’ on the IUCN red list. The otter in this photo is one of two brothers, Simuni & Akuri, who reside at the New Forest Wildlife Park. Akuri however will shortly be sent to Trinidad to breed with a wild-born female, and they’re offspring could be among the first captive bred giant otters to be released to the wild. This is just one small step in the effort to preserve the great families of giant otters patrolling the South American waterways, in addition to habitat preservation, local education and international conservation breeding efforts. So here’s to river wolves for centuries to come.

One thought on “Creature of the Week #2: Giant Otter”