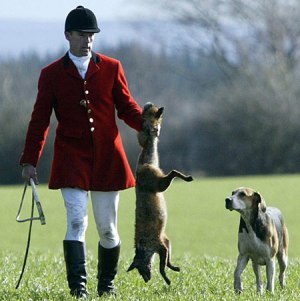 There are many reasons a new, all-tory government is bad news for wildlife and the environment; badger culls, land privatisation, fracking, and umpteen other reasons that trickle off the priority of ‘protecting(sic) hunting, shooting and fishing for all the benefits to individuals, the environment and the rural economy that these activities bring’ that this government considers essential in this department. It would demand a series of blogs, or a new blog entirely to cover it any justifiable depth.

But one clear elephant in the room that has been looming uglily for the last five years, and is now likely to be set loose without the staying hand of the Lib Dems, is the repeal of the fox hunting ban. Cameron has not hidden his disdain for the ban – “I have always been a strong supporter of country sports. It is my firm belief that people should have the freedom to hunt, so I share the frustration that many people feel about the Hunting Act and the way it was brought in by the last government”. While any repeal will be granted through free vote, and there are still a significant majority in favour of the ban, the possibility that this out-dated blood sport will return to hunting foxes rather than scent-trails in our countryside is by no means out of the picture, especially when one considers the influence its supporters maintain.

Whatever the outcome, the debate between ‘pros and antis’ is set to become increasingly virulent over the next few years. In this blog, I’ll be positing frequently-spoken justifications by those in support of the ‘sport’ – and in reply, the rebuttals of myself and I’m sure many others. Sentimentality and overly-emotive comments can dilute debate on both sides of the argument, so I’ve tried to be as evidence minded and ‘as it is’ with my views. I don’t expect most pro-hunt types to change their views whether they read this or I speak to them in person – but I do want to make clear that ultimately, any reasoning for fox hunting comes from the self-centred benefit to the individual, rather than being a holy bastion so desperately required in our countryside as is oft claimed.

“There are too many foxes, and they’re evil creatures – they killed all my chickens despite not eating them. They have to be controlled.”

Yes, there are a lot of foxes. It’s estimated there may be between 256,000-260,000 of them in the UK (of which many are urban), and it’s likely that the extinction of large predators in Britain may well have lead to an effect of ‘mesopredator release’ as had been recorded in Sweden, in addition to the large number of rabbits in our countryside. However, outbreaks of mange do regularly keep populations in check.

Regardless, foxes can take large numbers of poultry, often killing all in one go. This may appear barbaric, but by applying such anthropomorphic tendencies to the fox, pro-hunts can apply just as much judgement-clouding sentimentality that they accuse antis of having. In reality, this ‘cacheing’ behaviour is common among carnivores wanting to ensure a larder of food is available to go back to – a much more energetically economical solution than constantly being on the hunt.

Is this enough reason to control foxes though? Indirectly, foxes probably provide £7 million annually to farmers through rabbit control. Yet this still provides little consolation to the farmer who’s just lost an entire chicken coop twice in a row – if all security defences have failed, ‘problem animals’ are present or the density of foxes in the area is high, then lethal control may be a suitable option. This is not reserved to farmers though, as conservationists trying to protect rare ground-nesting birds will also resolve to this in similar scenarios – NGOs such as the RSPB and WWT do not hide the fact they do this.

The key matter here though is welfare – if you have to kill a fox, do it stealthily, quickly and humanely. If this has to be done in the breeding season, then take out the cubs as well as the mother under the same circumstances so they do not starve – given the difficulty of this, it’s even better if you don’t kill mothers with cubs at all. Why fox hunting simply has no place here, regardless of how much of a problem foxes are, is chasing down an animal over a huge distance, exhausting them to the sound of horns and baying hounds, and finally ripping it limb from limb can never, ever be considered humane. You would not wish farm animals to suffer when their time comes at the abattoir, and foxes are no different.

“But the dogs and horses love it. You’re just depriving them of a good life!”

I’m sure the dogs do benefit from the thrill of the hunt. But does that mean the many dog owners across the UK with breeds originally bred for hunting are depriving their companions of such an important factor to their quality of life? Hounds may not get to rip something to shreds after a trail hunt, but if it’s all about the chase why is this so different?

And I’m not a rider so can’t judge for horses, but as a grazing herd animal that gets just as much benefit from a canter out in the country, you’re not going to convince me on that point.

So was badger baiting round the back of the pub and public hanging in the square. I wouldn’t be surprised if many hunt supporters show disdain of bull fighting in Spain either. Whatever the case, we’re intelligent enough to realise that eradicating suffering should always be priority over preserving tradition. This is nothing to do with my political standing or where I live (which is in the countryside, funnily enough), it’s a matter of judging right from wrong.

“You just don’t understand the ways of the countryside.”

A highly offensive statement every time I hear it, as someone born and raised in it. A naturalist is as much country-folk as the farmer, the fisher, the gamekeeper or the B&B owner. The notion that in order to be ‘proper country folk’, you have to enjoy or at least positively support killing some of it’s inhabitants – largely those that don’t fit inside the ‘pretty’ model of songbirds, butterflies and the like – baffles me, and I think comes from an innate mindset of keeping the countryside a predominantly industrial landscape, as ‘manscaped’ as any urban area despite the disdain shown by many rural dwellers for such places. The countryside never required a band of red-coated persons on horses galloping after foxes to tear them to pieces.

“Well, it’s all about class at the end of the day, isn’t it. Bringing down those more well off than you.”

No. I don’t give a damn if it’s the Prime Minister or a Bin-Man riding atop that horse. This is clearly, undeniably, about animal welfare, not class warfare.

3 thoughts on “Welfare not Warfare: The core reasons behind the fox hunting ban”