Comparing what has gone in the world since my last blog post at the end of 2019 feels like looking back at 1985. Which is odd considering I wasn’t born until 9 years later. Regardless, I had originally written this as another nature diary to tie in with the current season a couple of months, hit a block as sometimes happens with these things, and it got buried under a pile of ‘to-dos’ that only took a bloody global pandemic to blow the dust off. Anyhow, I hope this writing gives you some solace in this trying time, which has necessitated the additional conclusion to this piece I never would have thought I’d have to add back then. 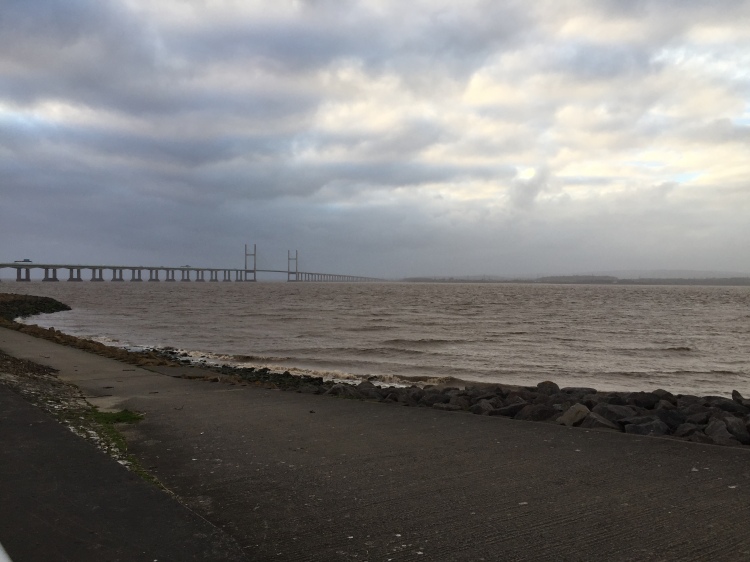 Storm Dennis came through last week. Not exactly the most tremble-triggering name for a front that resulted in the highest number of flood alerts in England’s history, so Dennis was rather a menace as it turned out. Still, it had calmed down a fair bit since then, or so I thought. As I opened my car door on a small lane on the edge of the River Severn’s southern shore, my hair whipped into my face and reminded me no, I definitely do need a haircut. The inland cosiness of Bristol smothered the reality that out on the water, the remnants of Dennis were still hollering even if it wasn’t quite a gale.

If anything though, it gave me newfound appreciation for this liminal meeting place of river and ocean, as it tries to justify itself as sort-of-sea. There were proper waves and white horses cresting the wind-churned water, comforting to someone spoiled by dramatic coastlines after four years living in Cornwall. It was still as brown as Willy Wonka’s chocolate river though, flotsam of driftwood and debris ripped from roots far away along the Severn’s inland course buckling in the surf. This interface where it’s not quite the mouth of the Severn nor the Bristol Channel can’t recreate that true sense of the sea, even if you can just about get it if you stand on the promenade at Clevedon down the road. But it did a reasonable job that day, and if I could give the ‘sea’ a gold star without the worry of plastic pollution, I would’ve been happy to chuck one into it.

The waves add a welcome new dimension to the audible world. The elephants in the room at this spot are the two great bridges that span the width of the Bristol Channel – the Prince of Wales bridge half a mile to your left, a noisy, brutalist piece of concrete architecture, and 2 and a half miles to your right the ivory-white struts of the Severn bridge. A time there was when the English and Welsh sat as isolated from one another as if on two different continents, yet could readily shake their fists at the site of the foreign shores and scheme how they would plunder their sheep and castles. Now, their descendants can commute from work in Bristol to home in Cardiff and vice versa in the time it takes to make dinner. Although given the local road infrastructure, that is if it’s been prepared in a slow cooker.

Turning in the direction of the Severn bridge, along the sea wall where Fishermen hunker down on calmer days, a turn inland meets the Pill Rhine where it flows in to the Severn. Here, dozens of ducks – wigeon, to be exact – bobbed in the surf.

The sight of ducks at sea satisfies me immensely. There are some proper hard-arses within the duck world well adapted for coastal life; just ask the eiders or long-tailed ducks, though you’re more likely to make their acquaintance along the Scottish coastlines. Wigeon are typical of both freshwater and saline lakes and estuaries, but don’t exactly strike you as hardened seafarers. As they dipped and bounced clumsily in the choppy waters, they gave the impression of naïve tourists who’ve found their way into the streets not recommended or even mentioned in the guidebook, yet continue to explore with gusto and open minds nonetheless.

When magnified in the binoculars, they are the most pleasant looking ducks to boot. And I don’t mean just in the physical sense of plumage, though their milk chocolate coloured breast and head, with a final flourish of caramel between the eyes does give them the honour of looking like they have been crafted for Easter by Thorntons (other luxury chocolatiers are available). It’s their teddy bear eyes, delightfully plump stature, and excited whistle that sounds like a hamster jumping down a water slide, that makes you feel like they’d be very pleased to have you around and would be delighted to meet your relatives.

Despite my anthropomorphic musings on their appearance, the wigeon are still far tougher than we could ever be living in such an exposed environment, so credit where it’s due. Crossing the bridge over the Pill takes you into Pilning Marshes, a very quiet local nature reserve in regards to human traffic, but the opposite for wintering water birds. The wigeon are far from alone here. From the shoreline to the saline lagoon and the coastal meadow in-between, the redshanks, shelducks, teal, lapwing and more are holding out the bitter months till the day a sweet change in the air calls them back to richer breeding grounds in Europe. For even if we wince in the chill winds here, it’s better than facing the blizzards in the upland meadows of the lands they hatched in.

Scanning the shoreline with my binoculars, a line of several dozen birds stood taller than any other: curlews. Gangly legs and curved bills that always made me think they were kiwis when I saw them as a kid, the sight of our largest wader is one that’s often savoured today for the wrong reasons. Winter’s about the best time to see them, because once continental breeders like these birds fly back, we’re left with hardly any.

Once a common site across our farmlands, the early cuts for silage and sterilisation of insect-scapes with pesticides has left whatever’s hanging on to drift in a ghostly diminution to inevitable extinction. It’s already happened almost everywhere. In the places that should theoretically be strongholds of our nature in National Parks, curlews are now on single digits for the number of pairs, if not altogether gone. Valiant efforts are going on, including in this very landscape where ‘head-starting’ chicks rescued from the doom of silage is now being attempted. But without a wider change in not just policy, but philosophy, on how we treat the land, they’re still set to exit stage right.

Time was when a naturalist wouldn’t look up for the sight of another curlew. Time was when those so inclined would shoot one for the pot. And then when we realise it’s falling from a precipice, only then do we exclaim the sacred nature it’s always had. The naturalist gets excited when they see one, and like me, linger for longer on them than any other bird despite all being of equal ‘value’. I wonder how readily shooters would take to putting them in stews again should their status improve, despite the conservation of this species apparently being the ‘true’ value of lucrative grouse moors (one of the only places where curlew breed successfully in this country due to the maintenance of heather and predator control – for grouse, with wader success a convenient side effect). It’s human nature to only truly savour something once it is fading from your view, or truly gone.

And writing this now, three months later on a sunny spring day when I should really be in a wood somewhere in more ordinary circumstances, this lesson seems more apparent than ever. Lockdown in the midst of this pandemic has been going on for nearly 4 weeks now, and to think that the liberty to visit such beautiful places, to savour a pint in the pub, to host a party with friends; to think these could be snapped so quickly from us yet seem so alien within a relatively short period of time, is a mental battle that hit all of us in the back.

But we are resilient, and resourceful, even in the darkest of times. By the time the curlews return in winter, I can only hope we’ve adapted for the better.