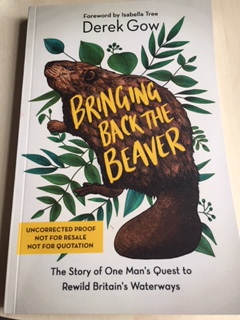 As anyone who’s ever met or seen a talk by my boss Derek Gow will know, he is as much a force of nature as his subject animal, the industrious beaver. I always enjoy waiting to see what the reaction is when I mention who I work for to those who have clearly witnessed or had dealings with him. It’s either jubilant enthusiasm for his rousing persona and cavalier can-do attitude that is bizarrely rare in a lot of wildlife conservation, or a sharp intake of breath and a wry smile to the point you can almost hear the traumatic flashback like a veteran in a Vietnam war film.

But in a world where our natural heritage is avalanching rather than trickling down the drain, Derek’s technique is increasingly vital, given it gives results. And importantly, he’s also capable of kicking your arse back to the task when it’s very easy to give up hope. This was something mentioned to me by National Trust rangers while working on two separate harvest mouse projects on Derek’s behalf (who, at time of writing, are undergoing calamitous times with over 1,200 jobs being cut as a result of the pandemic – it’s an absolutely awful scenario which no one deserved). After witnessing a Derek-speech, it reinvigorated their passion to keep doing what they can and doing better for wildlife, even when the odds seemed stacked against them.

This effort to inspire above the doom and uncertainty is very much apparent in written form in Derek’s new book, Bringing back the Beaver. After being supplied a pre-print copy and being asked to review it, I decided against the traditional format. After all, given I work for him that kinda skews the objectivity, and there might be severe consequences involving a bear trap and an angry wild boar if I went too critical. So instead, I’ve gone for a slightly different angle, looking at how the themes of the book need to drive our philosophy in protecting nature going forward.

I started working on a contractual, part-time basis for Derek just over two years ago, and over the three years before then, between my studies I regularly volunteered and cover shifted as an animal keeper at his wildlife conservation & photography centre in Devon. Both covered aspects not really seen at all in my zoology degree: with the latter, it was the practical aspect of caring for wild animals and then releasing them to the wild. In the former, and this is something that really should be instilled in all students hoping to practice conservation, it is people and politics.

Fundamentally, it’s probably what makes conservation distinct compared to other zoological fields such as evolution and behaviour. You can be quite happy dedicating your life to studying the familial bonds of African wild dogs, and largely keep the political elements within your academic bubble. But if you want to ensure those wild dogs have a future and try to leave some kind of legacy, you are entering a world where human values rule supreme, and you might be lucky to actually spend some time with a wild dog between government meetings, your negotiations with other land users and the restless mind at night.

The frankly difficult realities of politics in conservation are made well apparent in Derek’s book – especially given that in many cases, they really shouldn’t be difficult. Faced with something new like the prospective return of beavers to Britain, Derek charts how officials effectively set their own on-the-spot rules to stall efforts, including sending police to enforce a license that never existed. In many occasions this appears to be done simply to keep a status quo. Other times, those who really do want them back don’t step up because, as Derek describes, they are “Afraid of [the higher-ups] power to influence, refuse licences or cause critical delay”.

This is all despite the fact that a lot of the stuff put down on paper to block or allow nature restoration really doesn’t make a lot of sense at its core. Yuval Noah Harari, in his masterpiece of human study Sapiens, suggests that humanity’s success derives from our ability to create fictions, be they stories or laws, songs or economies. Such fictions are crucial for creating a functioning society of course, but they can also be abused to the detriment of what is actually real.

And, alongside our consciousness and our families and love and the joy of throwing something directly into the bin on the first try, nature is the most real thing of all. It’s what makes it so magic. It’s why I’ve dedicated my life to it, and going by the way Derek writes scenes of serenity in beaver wetlands almost purpose-designed to lower blood pressure, I’m pretty sure he sees it too. The beaver is an unknowing architect to a watery world that still shines with iridescent beauty in the complexity of the denizens it encourages, even if they live their lives red in tooth and claw.

By painting such scenes of this between the often anguishing political battles that had to be fought to get beavers back, Derek reminds us why these are worth fighting, and why having this animal restored is quite simply right (even if it means creating pragmatic management systems for when land use problems do inevitably occur, as has been done so competently in Germany). And we’re in a very interesting place for beavers right now in England.

This month, the beavers that ‘magically’ appeared on the River Otter and were subject to a 5 year licensed trial to assess if they could stay, were duly given approval to do so. That said, there are to be no more free releases in England, until a formal consultation on having these animals back nationwide is completed. Well, it better be completed soon. As both the effective management strategy created by the Devon Wildlife Trust, and the sheer joy from locals that have the beavers on their doorstep show, any further block would be very suspect indeed.

In the foreword to the book by Wilding author Isabella Tree, she writes about the surprise Derek found in discovering a sand lizard on a beaver dam in Bavaria. A note of trivia is that it was me who spotted it (see the trip report), but we were equally taken aback by the fact it was there in the first place. An animal that every book tells you must live in sandy heaths and dunes at all costs.

But of course, that book’s just another fiction. A skewed understanding of a magical world we will never completely grapple.

But the beaver, through its power to re-forge the old swamps and the unexpected connections of biology they fostered, helps us get that bit closer to the truth and beauty of reality. And after years of painful trying, they’re likely to be coming to a river near you.

‘Bringing back the Beaver’ will be published on September 10 2020. You can pre-order a copy here.

2 thoughts on “Bringing back the Beaver: Wading to magic through bureaucracy”